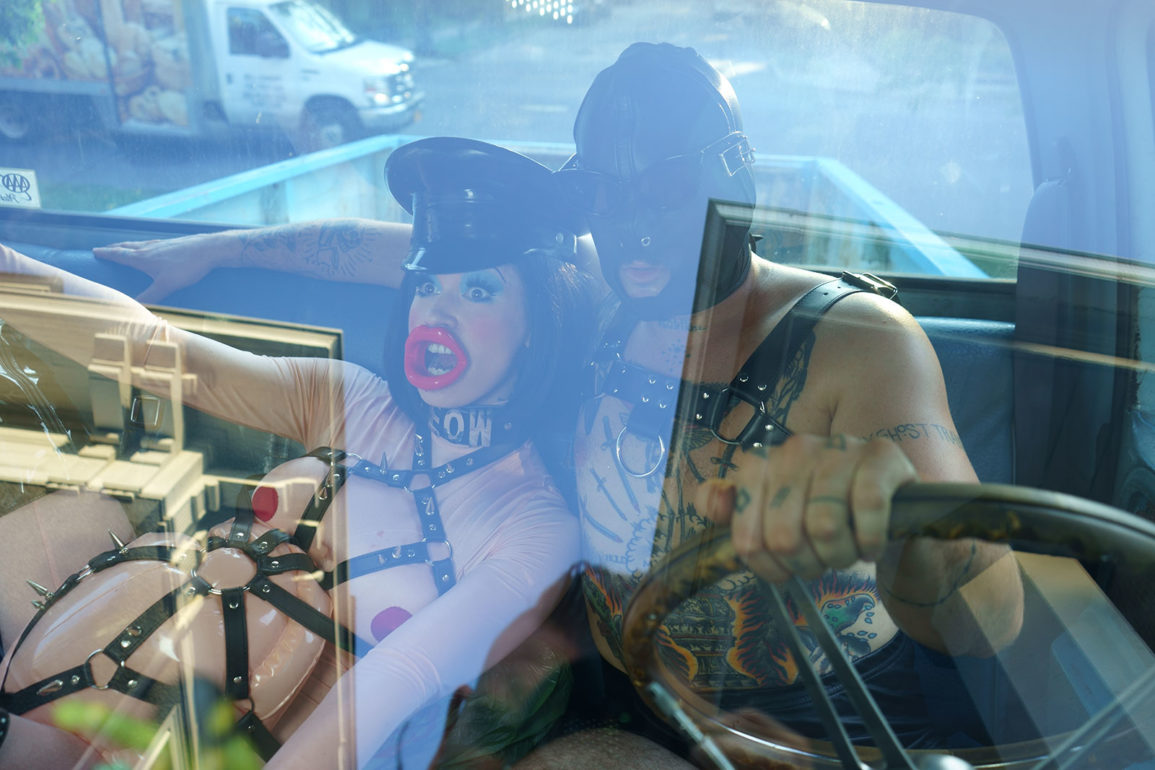 Performance artist The Baron (Baron of the Universe) aka photographer Baron of Juxta Concept was born and raced in Helsinki Finland and has been making name in sideshow and freakshow scenes around the World since late 90’s. He is mostly known for his infamous Guinness World record holding weight lift with his nipples.

The Baron has always been interested in surrealism and darker side of the visual arts. He started photographing in his mid-teens but left the camera behind when he ran away with the circus. Few years ago, he picked up the camera again and started finding his own distinctive style. Since the shadow side was more for his taste, he found that the film noir and abstract art noir are more his territory. Most of his work is within these lines but he is always open for other kind of artistic adventures too.

The Baron sees his subjects often as an organic sculpture and shapes the model into the desired shape and position instead of telling them what to do or how to pose. This can be seen in his latest black-and-white photos and in a photography art book he’s working on at the moment.

Barbalollo “the inflatable friend” character was originally created for live performances, but Inka found its potential as visual art after our first photo-shoot in 2018. The latest shoot introduces the surrealistic and kinky love story of absurd blow-up doll and agalmatophilia fetishist Pervert. This series was created together with my fellow stage performing partner Inka Nevala aka LouLou D’vil (creator of Barbalollo) and Eli Rose (Pervert) in Brooklyn NYC in 2019.

Blow-up dolls have been a cross-cultural phenomenon as an artificial creation for human sexual pleasures for centuries. In the past seen as taboo but in today’s generation seen as normal. Or is it when affection is taken this far? We wanted to speak on behalf of acceptance by using bright colors in this controversial topic. Our mutual goal was to show that fetishes and sexuality can be playful and sometimes even comical instead of the mysterious and often dark stigma surrounding these topics. These characters purpose is to shatter the norms of love, sexual partnership and motherhood in positive means.

Visual & performance artist Inka Nevala is a native of Finland, living in Brooklyn NY. She has bachelor’s degrees in Graphic Design and International Business & Marketing. Inka started her performing career as a fulltime burlesque artist “LouLou D’vil” in 2008, performing internationally in Europe, Asia, Canada, Australia, New Zealand and US since then. In 2013 she was crowned as Miss Exotic World at Burlesque Hall of Fame in Las Vegas. Her other BHoF titles are Best Debut 2011 and Most Classic 2013. She was voted as No.1 Burlesque Figure in The World in 2013 on Burlesque TOP50. Inka is also an inspiring burlesque instructor and producer. These achievements were her ticket to O-1 visa, which enabled her to move to US in 2015.

In 2017 Inka started to explore different ways to speak through performance art. She created an absurd blow-up doll character “Barbalollo”, who is ever-changing physical comedian. Through this character she reached a new way to challenge her audiences, but mostly herself both artistically and as a female who has been only viewed as “sexy naked woman”. Inka has always been interested in challenging the feminine norms by modifying her muscular body with tattoos & piercings, and with extreme projects. Barbalollo was a big risk to LouLou D’vil’s brand, however she believes that without risks you can’t grow as an artist or as a human being. In her work she is an object, but she will always challenge you and how you see her as an individual.