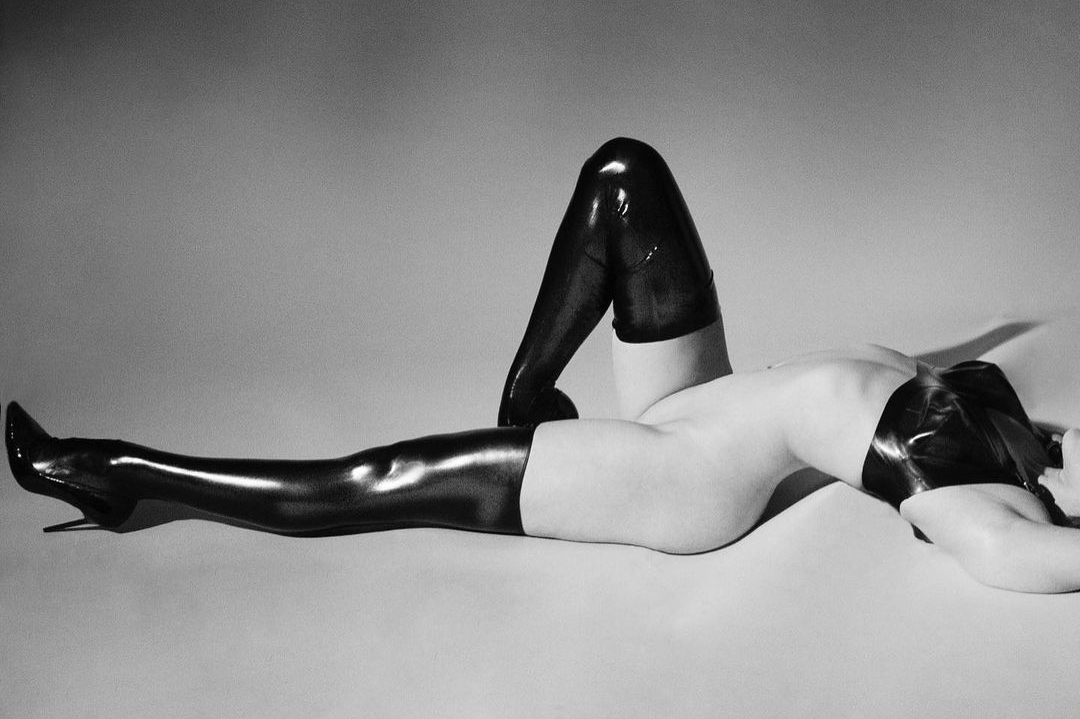 I am so aroused by kink and have toyed with the idea of branching into more of it on many occasions, but I feel there would be so much for me to learn, and quite frankly I adore my vanilla dates too. Recently however, I accepted a date which was role-play only and a little outside of my usual offerings. The gentleman had described before-hand what he did and didn’t like and specified some things he definitely wanted to happen.

I’ll admit, it is a night I find myself revisiting, and one which never fails to bring a smile to my face.

He’d requested that I wear thigh-high leather boots, a leather skirt and a dinner jacket. He wanted to draw attention to us, he wanted those in the know, to sense what we were up to.

He stood to greet me in the waiting area, our eyes directly aligned as I now stood towering over most people in my six-inch heels. I knew he would be tall but I didn’t expect him to be so broad and handsome. He’d specified for me to be icy from the moment we met. This was a role-play scenario from start to finish.

“Olivia, my darling – how was the drive?” He embraced me.

“Long and boring dear” I replied without lifting a hand to touch him and moving my face away, publicly rejecting his kiss. I walked in front of him to our table feeling the eyes of fellow couples upon us. We were here for drinks only, and since the conversations we’d had over email I was both intrigued and excited to get him alone.

“I want you to use, abuse and humiliate me Ms Olivia.”

Hearing the words verbalised by this almost stranger was even better than seeing them written in my inbox.

“Your safe word is ‘I’m weak” I told him. His eyes lit up as he reached inside his jacket and handed me a black envelope containing my fee. I placed it inside my handbag and left for the bathroom to count it, taking far longer than I needed to.

A handwritten note in black, beautiful letters read “You are a goddess, and I am forever in your debt, for the following hours I’ll do anything you ask of me”. As anticipation built, I wished I could have a vodka and tonic but in just a few short hours I would be driving home. There was enough money for an overnight interlude, but the fun was in the fact I would leave, we both knew this. There would be no intimacy of him sleeping next to me, no watching me get out the shower, brush my hair, no long leisurely mornings; just a few stolen hours of secrecy and then I would vanish from his life once more.

I headed back to the table, took a sip of my white wine and then pushed the remaining glass all over him. Some of it had gone on my boots so I handed him a napkin to wipe it off as I remained stood. The subtlety of doing this in public was thrilling. After a couple of minutes I kicked his hands away.
“I’m not sitting here with you drenched in wine like that, it’s time to go to the room now”.

“You’re perfect” he whispered as I followed him, refusing him eye contact. Before we entered our room I pushed him up against the wall finally looking straight into his eyes and held him by his neck.

“There are some rules to follow when you’re in my presence alone, do you understand?”

“First rule: never stand in my presence, get on your knees and remain on them”.

He got down on his knees in the corridor.

“Second rule: you do not touch any part of me ever other than when specifically directed.”

He did as he was told.

He unlocked the door and crawled into the suite. I told him to remove his shoes, socks and jacket and wait on his knees facing the door with his arms up like paws while I toured the room. I took longer than I needed remarking that it was a beautiful hotel to be meeting with a loser like him.

“I love how you overcompensate for your masculinity with this glorious suite”.

I then took a steel collar and chain out of my bag with the word ‘PIG’ inscribed. He’d paid for this in advance of our date. I stood behind him as he still faced the door and fastened it around his neck. I then instructed him to take off his belt, trousers and shirt very slowly then attached the lead and lightly kicked him round the face.

“Before I am subjected anymore of your disgusting body I am going to put nipple clamps on you. Put your arms behind your back, open your mouth and stick out your filthy little tongue.”

I squeezed both of his nipples a few times before attaching them, then slapped him round the face.

I both wanted to hear him say he was weak and didn’t want to push him too far, what a fun line to walk along with him.

“Show me your embarrassing little cock”.

He removed his underwear and sat there naked while I looked at him with a big smile. His cock rock hard.

“I knew the moment I met you in the bar you’d have an embarrassing little body, I love it when I am right. Do some of the poor women you pay have to actually play with that thing?”

I ordered him back on his knees, legs apart, arms behind his back, mouth open and tongue out. I wanted to put my fingers and then my whole hand in his mouth, pull him around and make him feel violated by me, but I knew the thrill for him was me barely touching him. Verbal humiliation and barely any skin contact while he scurried around on the floor was what he craved.

I instead tugged his nipple clamps and kicked his balls and cock with by boots.

He performed lots of tasks for me while naked such as crawling to collect objects and bringing them to me with his mouth, never up to the standard I wanted. He made me a cup of tea which once not piping hot I poured onto his chest.

Once I was ready, I blindfolded him with a pair of stockings I’d worn to fuck someone else.
With him on his knees facing me I described how I was taking off my beautiful black velvet knickers. Then I rubbed them all over his neck, not allowing them close to his face where I knew he wanted them, pulling his nipple clamps more than before and tightening them.

“You’ll never get to see or taste my beautiful pink pussy.”

I then led him my his lead to the bed he would later sleep on and lay him on his back. I pulled on a pair of latex driving gloves, covered them in lube, and lifted up by skirt.

He opened his mouth and let his tongue lie out as I began to pee all over his face. This is something I’d been asked to do many times before both in paid and real-life settings and always declined, but it was always one of my biggest fantasies. I rubbed it all over his face, into his hair, stubble and stuck my gloved fingers deep into his mouth and the depths of his throat making him gag. I gave him a little more and told him to rub it all over his cock.

He ejaculated all over his chest.

“What a disgusting little pig you are”. I smiled.

I removed his blindfold.

“When I unfasten this collar from your neck you are no longer my filthy piggy do you understand?”

I removed his collar, rested his face on my bare thighs and stroked his hair and face. He took the palm of my hands over his nose and mouth inhaled and kissed them for around 15 minutes.

I stood, gave him a hotel robe to put on and he rested on my thighs for a little longer.

Then I asked him to stand and walk me to the door, he took both of my hands and kissed them a few more times.

I closed the door and left.